Does Drinking Beer Make You Fat?

Posted on November 17, 2018 by Patrick Bailey
Please share with your friends... 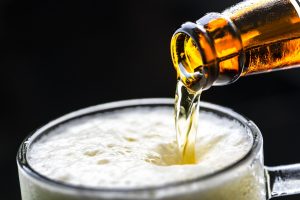 When one talks about beer, it is not far-fetched for people to be reminded of a beer belly. This is what a person usually complains about following their “fondness” for drinking their favorite alcoholic drink. But contrary to popular belief, consuming beer does not automatically increase the fat around one’s belly. Several factors are involved in getting that unwanted bulge around the tummy.

Beer: Does it Make You Fat?

A beer belly is not exactly caused by drinking beer. The level of fat found in the said alcoholic drink is negligible. However, it can contribute to making a person fat. An individual who drinks beer gains some weight because of the appetite for destruction that goes with it.

People have this belief that drinking beer causes belly fat. But that is not true. Beer is not the only reason why people gain fat.

The calories found in beer are empty calories. They are not processed by the body because they get absorbed into it.

If not beer, then what could be the culprit of that belly protruding above your pants? Well, the answer is any kind of calorie. This may come from calorie-based food, alcohol, and sugary drinks. These kinds of calories can increase the possibility of unwanted weight gain.

But drinking beer can contribute to a certain degree in the bulge found in your midsection. The usual beer found on the market today contains 150 calories. Drinking several bottles in just one sitting will cause unwanted calorie gain. Aside from the bulge, doing so may lead to alcohol abuse which will eventually necessitate an alcohol abuse treatment.

So, if you ask whether the beer can make you fat, the answer is in the negative. But it can somehow contribute to unwanted calorie gain if you drink several bottles in one sitting.

Bulging Belly: How Does It Happen?

Consuming more calories than you can burn is not good for you as the excess are stored in the belly. Both girls and boys begin with the same fat storage but this changes during the adolescent stage.

Women have more subcutaneous fat than men. This is why the extra calories are stored in the buttocks, arms, bellies, and thighs. Men, on the other hand, have less hypodermic fat. So excessive calories are only stored in their bellies.

Beer bellies are more common among older individuals. This is because one’s ability to absorb calorie goes down as people get older. As a result, people gain weight easily and become less active.

Should You Be Concerned About Your Beer Belly?

The bulge on your midsection changes the appearance of your body. You may feel like you cannot wear any swimsuit or clothes that show off your curves. However, there is more to beer belly than just the physical appearance.

Belly fat is linked to several health issues, such as type 2 diabetes, high blood pressure, and cardiac disease. The extra pound found in the hips and thighs are a bit less risky than what is found in the belly.

You should also take note of your waistline. The hypodermic fat found in the waist and buttocks is not that dangerous for as long as it does not reach 35 inches for women and 40 inches for men. The waist circumference signifies the level of intuitive fat in the midsection area.

If the waist perimeter goes beyond the mentioned numbers, there is an increased risk of high blood pressure, heart disease, metabolic syndrome, and diabetes. This is why most doctors recommend that people keep an eye on their waist measurements.

Tips on How to Get Rid of Beer Belly

Beer belly is a common concern for both men and women. This usually appears at the age when there is a significant drop in the metabolism rate. Beer may not be solely responsible for the accumulation of fat in the midsection, but other alcoholic beverages can contribute to unwanted weight gain.

Yeasty and delicious beer can contribute to an expanding waistline. Thus, you need to create a plan on how to change your drinking habits. Here are some useful tips:

Patrick Bailey is a professional writer mainly in the fields of mental health, addiction, and living in recovery. He attempts to stay on top of the latest news in the addiction and the mental health world and enjoy writing about these topics to break the stigma associated with them.
View all posts by Patrick Bailey →
This entry was posted in Good Health. Bookmark the permalink.