The sodium in your diet

Posted on February 14, 2012 by Jemima
Please share with your friends... 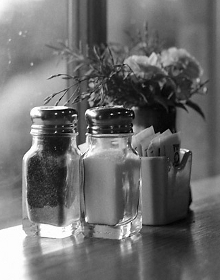 Dieting trends change every year, reset in part by the next groundbreaking nutritional study that sheds light on new aspects of our dietary health that we hadn’t before realized. Accordingly there is a new dietary monster to fear this year: sodium. Though you’ve likely known all along that an unhealthy sodium (or sodium chloride, aka everyday table salt) intake can increase the risks of heart disease and high blood pressure, the worry of a sodium overload has always been overshadowed by more publicized dietary restrictions. The dangers of foods high in sugar of high fructose corn syrup, fried foods and processed foods have always dominated the conversation. But when you think about it, sodium is the core issue behind many of these unhealthy foods.

A highly publicized study done by the CDC this year has a lot to say about the state of sodium consumption in America. By their estimates, about 90% (yes, 9 in 10) of Americans consume too much sodium. I’d like to spent the remainder of this post investigating the nuances of the sodium problem that plagues most Americans.

Let me first establish the difference between sodium and salt as we commonly understand it. Sodium is an element that our bodies need in order to carry out basic metabolic processes. Usually sodium is associated with another atom to form some sort of salt. The most common form of salt we know is NaCl, or sodium chloride. The excess of sodium in American diets can usually be attributed to both large quantities of salt in our diet and the sodium injected into processed foods as a flavor enhancer or a preservative. According to the report, adults in good health should consume about 2,300 mg of sodium a day at the most, while people with more complicated health history (older, high blood pressure, obese, etc.) should consume no more than about 1,300 mg of sodium. To put that into perspective, the CDC study says that Americans consume, on average, about 3,300 mg of sodium per day.

One of the most talked about parts of the CDC report is their findings that bread makes up for the majority of our sodium consumption. It turns out that the excess of sodium in most Americans’ diets doesn’t come from French fries or from salty bagged snacks. In fact salty snacks were listed at the bottom of the CDC report’s top ten sources of sodium in our diets. Bread might not have as high of a concentration of sodium as salty snacks or French fries, but we tend to eat bread in much larger quantities than any other food. Think about how many times you ate bread in the past day. Did you have a muffin, toast, or a bagel for breakfast? Did you have a sandwich or a slice of bread with your soup for lunch? How about rolls or bread slices at the dinner table? Nutritionists are saying that these things are adding up to account for our high sodium intake. So next time you see the complimentary bread basket at a restaurant, you might want to pass and save your sodium quota for saltier foods.

Sodium, potassium, and other minerals

Limiting sodium is a good thing, but it’s not the only thing you should do. A recent article in the Chicago Tribune emphasizes the importance in balancing the entirety of minerals in your diet. If you cut back on the sodium in your foods, you should also increase the minerals likely found lacking in your body. Potassium stands among these minerals that Americans miss out on by subsisting on a diet of processed foods. Potassium promotes cell growth and overall bodily health by working in your system to keep down cholesterol and blood pressure levels. The same holds true for minerals like phosphorous, magnesium, and calcium, all of which are electrolytes meant to maintain normal organ and body function. Lacking these minerals can have serious repercussions on your body in the long run, so it’s best that you consume foods rich in minerals when you can. Foods high in potassium and other minerals include raw veggies like broccoli and spinach, raw nuts, beans, and sweet potatoes.

How much sodium do you think you consume on any given day? Are you conscientious about eating enough minerals?

Jemima Lopez is a freelance blogger and writer who writes for Zen College Life, the directory of higher education, distance learning, and online degrees. She welcomes your comments at her email: lopezjemima562 @ gmail.com.
View all posts by Jemima →
This entry was posted in Good Health and tagged avoid-weight-gain, guest-diet-blog, most-common-form-of-sodium-in-american-diet, the-most-common-form-of-sodium-in-the-american-diet, wightwatchers. Bookmark the permalink.