Turbo-Charge Your Weight Loss With HIIT

Posted on October 21, 2011 by RonFritzke
Please share with your friends...

Back in June of this year I wrote an article for Guestdietblog.com about nutrition as it relates to riding a bike. In this article I’d like to speak of an exercising style that serves to increase the effectiveness of exercise when done in tandem with the healthy eating habits written of in Guestdietblog.com.

The Fitness World Is Catching Up To The Olympians 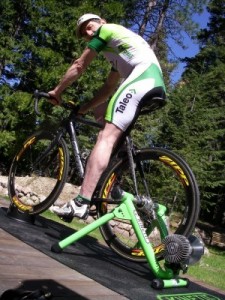 HIIT has been in the fitness arsenal of Olympic-level athletes for decades. Whether it’s long distance runners, swimmers, or cyclists, ‘intervals’ have played a key role in just about every Olympic champion’s preparation.

Now the fitness world has jumped on board and everyday people are losing weight more quickly, while not having to spend as much time on their bikes or in their running shoes. In short, HIIT is a fitness tool that just about anyone can benefit from.

But What is HIIT?

Unlike cardio exercise, in which the workout is done at a sustainable, steady intensity, HIIT workouts feature variations in intensity. Someone doing a cardio workout selects an intensity level at which they’re able to process enough oxygen to supply their muscles in ‘real time’. There is no having to ‘catch up’ in the oxygen department. This is called aerobic exercise.

HIIT training alternates periods of intensity at which the muscles go into ‘oxygen debt’ with times of easier exercise during which the heart and lungs can catch up and get adequate oxygen to the muscle. During the hard intensities, the muscles are working harder than the oxygen can be supplied, which is called anaerobic exercise.

Here’s What’s In It For You

The ‘magic’ in HIIT is in what happens once the workout is complete. Unlike after cardio workouts, a person’s metabolism can remain elevated for hours following ‘intervals’. This means that when you’re sitting on the couch watching your favorite Home and Garden or Reality TV show, you’re still burning fat.

That’s right, your internal furnace is still smoldering along far past the end of your workout, and that furnace burns body fat!

Give Me An Example, Please!

High Intensity Interval Training can be best understood by looking at a sample workout.

But before we do, let me emphasize that because HIIT is more intense than casual exercise, your need to get a doctor’s clearance before initiating this type of activity is more apropos than ever.

I do this workout on a Kinetic Road Machine Trainer, but there are a lot of indoor cycling trainers like the CycleOps Fluid 2 bicycle trainer that will fit the bill.

Make Efficient Use Of Your Exercise Time

So if you’re like most people who’re constantly on the watch for ways in which to save time and be more efficient, consider incorporating one or two High Intensity Interval Workouts into your fitness week.

You’ll no doubt welcome the variety, and you’ll achieve much more weight loss than if you stay strictly with a steady-state form of exercise.

About the author: Dr. Ron Fritzke reviews cycling gear on his site, Cycling-Review.com. Besides his private Chiropractic practice, he’s on the Sports Medicine team at the College of the Siskiyous. A former 2:17 marathon runner, he now races his bike in Northern California.

7 Responses to Turbo-Charge Your Weight Loss With HIIT