Symptoms and Causes of Periodontal Disease 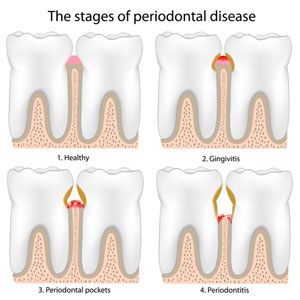 When your hands bleed when you wash them, we get concerned, yet, there are many people who think it is normal if their gums bleed when they brush or floss. The researchers at the U.S National Institutes of Health (NIH) found that half of Americans over 30 years had bleeding gums. The swollen and bleeding gums are the early signs indicating that your gums are infected with bacteria. If nothing is done then the infection can spread and this could destroy the structures which support the teeth in your jawbone. Eventually, your teeth can become loose such that they can be extracted.

“Peri” refers to around and “odontal” means teeth. Periodental diseases are infections of the structures around the teeth including the gums, the cementum which covers the root, periodontal ligament and the alveolar bone. In the earlier stage, the infection only affects the gum while in more severe cases; all the supporting tissues are involved.

The first symptoms of periodontal disease usually starts with gingivitis where the gums appear reddened at the margins, slightly swollen and bleed when gently provoked by the tooth brushing or flossing. It is often thought that brushing too hard can cause the bleeding gums and this should be taken as a warning sign.

Bad breath and taste are also commonly associated with the periodontal disease. With the progression of this disease, the gum tissue begins to recede and expose the root surfaces that cause tooth sensitivity to the temperature and pressure change. The gum tissues will start to lose the normally tight attachment to the tooth causing the pocket formation which is detectable by a dentist during the periodontal probing. With the progression of the pocket formation, the supporting bone loss may be noted around the teeth.

The abscess formation which is a collection of the pus pocket denoted by swelling, pain and discharge from the gum tissue is a later sign of this disease. Eventually looseness and drifting of teeth occurs as bone is lost in more advanced degrees of the disease and this may be apparent as eating becomes more difficult or uncomfortable.

Cause of Periodontal Disease

When the gingivitis is not treated, it can advance to periodontitis i.e. the inflammation around the tooth. The gums pull away from the teeth and form spaces which become infected and the body’s immunity system fights the bacteria as the plaque spreads and grows below the gum line. The bacterial toxins and the natural response of the body to the infection start to break down the bone and the connective tissue which hold the teeth in place. If not treated, the gums, bones and tissue supporting the teeth are destroyed. Ultimately, the teeth will become loose and have to be removed

The prevention measures are:

The cause of periodontal disease is the poor oral hygiene and the untreated gingivitis which lead to tooth loss and other serious conditions. The symptoms are swollen, puffy and receding gums that are tender and bleed easily.

Now that you have been well-versed with the symptoms and causes of periodontal disease, you should carefully consider effective and the most affordable costs treatment for this disease. The treatment for periodontal disease involves professional cleaning as well as oral rinses. The periodontists in India are experts in replacing the missing teeth the dental implants and the treatments for this disease include, gum graft surgery, non surgical treatments, laser treatment, dental crown lengthening, regenerative procedures, pocket reduction procedures, dental implants and plastic procedures.

Here you will get the detailed info about periodontal procedure: